What is A-Level Politics and Government?

‘People’s daily lives are hugely influenced by politics and I love to see students begin to appreciate just how much their own lives (and those of others) are affected by political processes and become passionate about the subject. Students care about it so much because it deals with the most important issues faced by the world.’
Andrew Colclough, Head of Politics

A level politics covers the politics of the United Kingdom, The United States and political ideas. Students will understand major political processes and how they shape society and the lives of individuals within it. The common assumption is that the UK and US are democratic. In theory, we the people, control the Politicians. The course examines this fundamental question: Politicians have a huge power over us but how much power do we have over politicians? Students start to understand how political processes work and then make judgements about the UK and US systems.

The A level also covers political ideas and thinkers, which give an understanding of the main views and values we hold about human life and society. Ideologies such as liberalism, conservatism, socialism and feminism attempt to answer questions about how society works at the moment and what makes a good society. Are we defined more by nature or nurture? Are humans naturally good? Should we aim for greater equality in society? This is a thought provoking aspect of the course which also helps us to have a greater understanding of politicians and political parties.

One of the defining characteristics of the subject is that it is very contemporary. Students learn to understand the political systems of the US and UK by studying developments as they happen. This sheds further light on the topics studied in class and gives a great sense of the importance of politics. Our students have explored the elections of 2015 and 2017, the impact of the EU referendum, Scottish independence and civil liberties issues such as assisted suicide and gay rights in the UK. In the US they have examined the presidency of Donald Trump, issues of race and racism, foreign relations with countries such as China and North Korea and gun control in the US.

A key part of the study of politics is ensuring that students have an awareness of the latest political developments and that they engage with this for themselves. We have recently visited Parliament and Congress to Campus events as well as Washington DC. There have been a number of debates and talks, with students participating in election and referendum debates. In addition, we invite political speakers to d’Overbroeck’s. The main local parliamentary candidates, including Nicola Blackwood and the new MP, Layla Moran talked to our students. Other speakers have included Ed Vaizey MP and Paul Kirby, former director of the No 10 Policy Unit.

What are the main topics?

There is no coursework in this subject with three, two hour examination papers at the end of the course. Questions require essay style answers, with some questions being based on a stimulus and other shorter questions which require comparisons to be made between the US and UK. 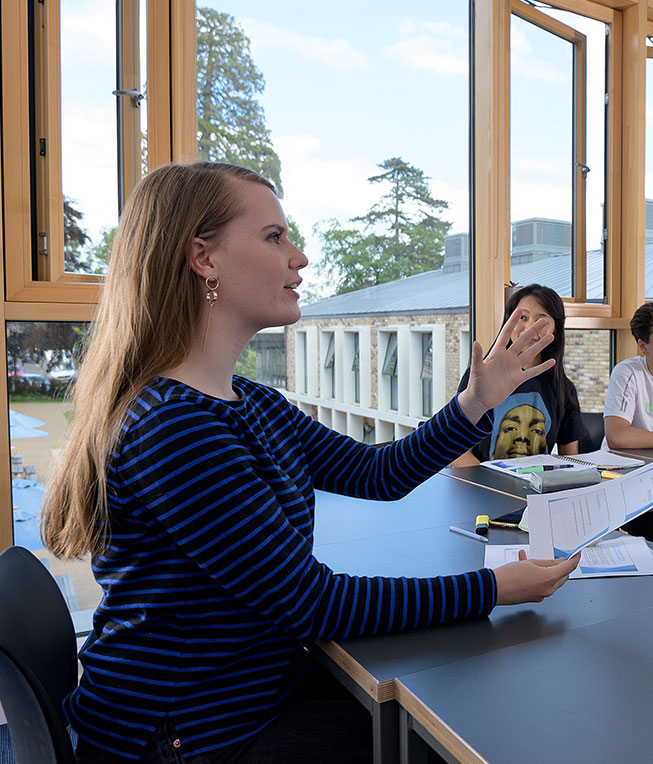 Perfect for students interested in how society is run.

Politics is a particularly popular subject for students who want to study Law or Politics; Politics, Philosophy and Economics (PPE) or International Relations. Many of our students have gone on to study Politics, Business or Economics at university. For those interested in careers in law, diplomacy, the civil service, journalism and even business, politics can be a very useful subject to study. Of equal importance is that politics is a subject which many students become addicted to, allowing them to prosper in the subject for itself, helping them to achieve the results they need for other courses at University.

Who teaches Politics and Government?