What is A-Level Computer Science?

Computing is everywhere. Whether it is as simple as checking in with friends on social media or as sophisticated as modelling the weather systems of other planets, modern society simply could not function without computers. However, as ubiquitous as computers are, very few people really understand how it all works. If you choose Computer Science you will, by the end of the course, be one of those who do. Computer Science at A-Level will give you a deep insight and understanding into how it all fits together, from the microprocessor, buses and assembly language, to memory, storage, operating systems, programming languages and network architectures.

The first year focuses on the development of your programming skills and the fundamentals of computing. The practical programming segments of the course focus on computational thinking – the ability to find comprehensive solutions to open-ended problems. Being able to take a given problem and create a working solution is a key skill you will acquire during the first term. This will be achieved in a variety of ways using tutorials, quizzes and also short and long-form assignments of increasing complexity.

We begin the course assuming that you have no previous programming experience, however, if you have, you’ll have a head start and be given assignments based on your ability. The theory portion of the first year looks at how data is stored, the manipulation and transfer of data and how computer systems function (in terms of both the hardware and software). Looking at things such as logic gates, multiplexers, assembly language and processors. Also, there will be introductions to how sound and images are stored and how they can be generated programmatically

The A-Level project allows you to develop your practical skills in the context of solving a real problem. The project is intended to be as much a learning experience as a method of assessment; you will have the opportunity to work independently on a question of interest over an extended period, during which you can extend your programming skills and deepen your understanding of computer science. You will not be limited in the nature of the project nor the language in which it has to be produced.

The project is a substantial piece of work in which you plan, develop and test a computer system. Ideally, you should produce a system to meet the needs of a real person (perhaps a parent, a relative who works in a local business, someone who helps run a club or society with which you’re involved etc.). Projects written by our students in past years include an iPhone application that used geo-location to allow strangers to communicate with each other, to ask questions such as ‘any good gigs on tonight?’ and to post messages onto a virtual wall; a website handling bicycle rental and an application that made use of a Wii controller to allow anyone to control a computer using hand gestures. These were very sophisticated applications, and your project is limited only by your imagination and ability.

In the second year, the theory work builds on what you learnt in the first year. You will study topics such as operating systems, computer architecture, data, databases and networking in more detail. There are also some new exciting paradigms such as functional programming and its applications to Big Data. 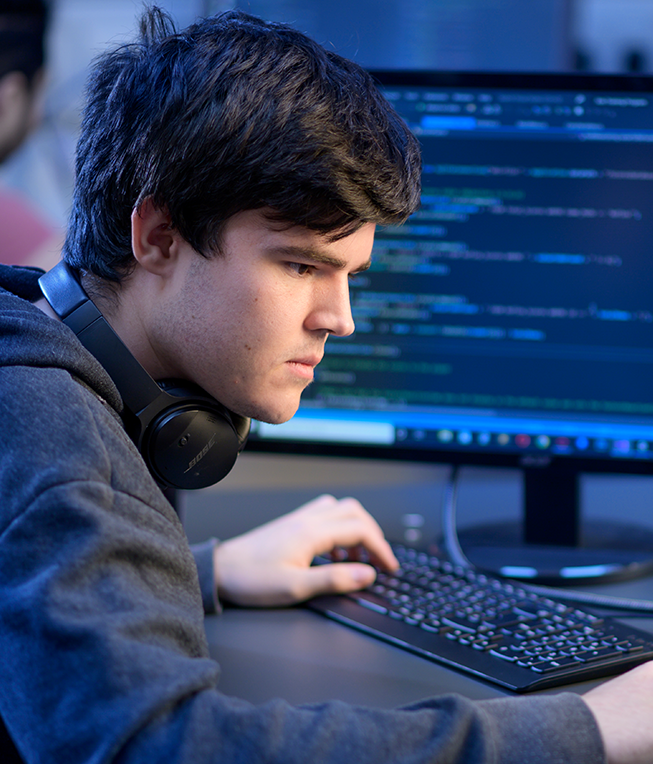 If you enjoy using computers and you want to know more about how they work and how they can be programmed, you should definitely think about studying Computer Science. You’ll need to enjoy working by yourself on a computing project, and also be prepared to contribute to class discussions whilst working with other people in designing computer systems. It’s a varied and interesting course – hard work and a lot of fun.

The increasing scope and importance of computer science in everyday life means computer scientists are widely in demand and have their choice of work.