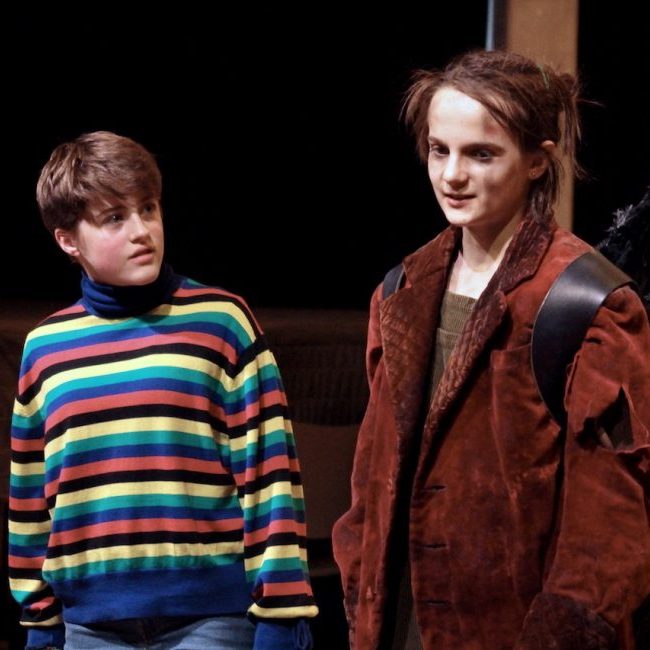 Michael (played by Isaac Gavaghan) who finds a strange creature living in his garage.
Skellig (played by Eliza Robinson) is a bedraggled, bad-tempered being who first appears terrifyingly by torch light. Is he even real? Michael isn’t sure, so asked his friend Mina to come and see him. Mina (played by Leonie Freeden) is obsessed with nature, especially birds, and the works of William Blake. She, Michael hopes, will have the answer as to what to do.

Meanwhile Mum (played by Katie Brown) and Dad (played by Kayden Sillah) are distracted with worry, as their newborn daughter is dangerously ill in hospital. Michael has an instinct that Skellig, whatever he is, might be able to help.

The first performance of the play was on Monday, for an audience of parents, TIS students and primary school children. Nerves were running high, as this play is certainly not an easy one – every member of the cast had dozens of lines and cues to remember. The first performance went very well; TIS students were inspired, exclaiming ’27 and 53!’ as they left the hall.
Tuesday was the most challenging day for cast and crew; two performances, one for their peers at Leckford, and a second for their parents. All went smoothly, despite a small hitch when a key prop went missing – a dead bird! Following the afternoon performances, the Leckford audience were full of questions, ranging from ‘Why was there an angel statue?’ and ‘What’s the moral of this story?’ to ‘Was there really Chinese take-away on stage?’

By the evening performance, the cast had found their confidence, and performed with energy and professionalism. Special congratulations go to Isaac, who had to learn a monumental number of lines and cues, and really held the play together in his role as Michael. Thank you to Eliza for giving her all in her wonderful role as Skellig; her love for theatre and professional attitude really helped to rally the rest of the cast. Well done to Leonie for shining in her role as Mina and showing an extraordinary memory and excellent diction for some very complicated lines about birds’ bones, and the archaeopteryx. Ciara Stimpfig and Charlie Urwin provided comic relief in their roles as Leakey and Coot, as did Sam Heide as the science teacher, in which he gave an uncanny impression of David Attenborough.

All the cast have worked very hard. Auditions were back in May, so it’s been a long project, and a very enjoyable one. Thank you everyone!

Many thanks to Becky for her write-up and the English Department for pulling off this broodingly eerie production.

D’Overbroeck’s provides facilities for students to explore their interests in the performing arts and also runs a Drama A-Level programme for its sixth form students.